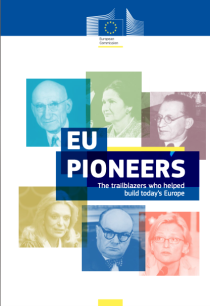 From resistance fighters and Holocaust survivors to politicians and even a movie star, the visionary leaders described in this booklet inspired the creation of the Europe we live in today.

The EU pioneers are a diverse group of people, but they shared the same ideal: a peaceful, united and prosperous Europe. Many of them worked to bring about the end of conflict in Europe after the horrors of two world wars and to promote peace and solidarity between people. They were champions of the fundamental values upon which the European Union is founded: freedom, democracy and equality; respect for human dignity, human rights and the rule of law; and solidarity and protection for everyone in society.

The aim of this booklet is to chronicle the impact of their contributions to the foundations of the EU. They worked for peace and prosperity, and to eradicate social exclusion and discrimination. They helped develop the systems that led to economic stability and eventually a single currency, and they championed Europe’s rich cultural history. Without their drive and imagination, we would not be living in the sphere of peace and stability that is modern-day Europe.