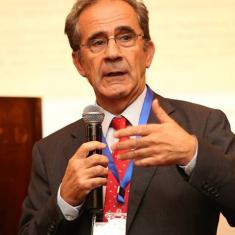 Former Executive Director of the Anna Lindh Euro-Mediterranean. As a journalist Andreu Claret has been Director of the Spanish News Agency (EFE) for Sub-Saharan Africa, Central America and Catalonia. Claret was also Director of the European Institute of the Mediterranean (IEMed), based in Spain, and as an analyst of international affairs has specialized in North-South relations, Mediterranean cooperation and intercultural dialogue. He has also taught political journalism at the Universitat Pompeu Fabra in Barcelona, and is a member of the Board of Directors for the Foundation for the Future.