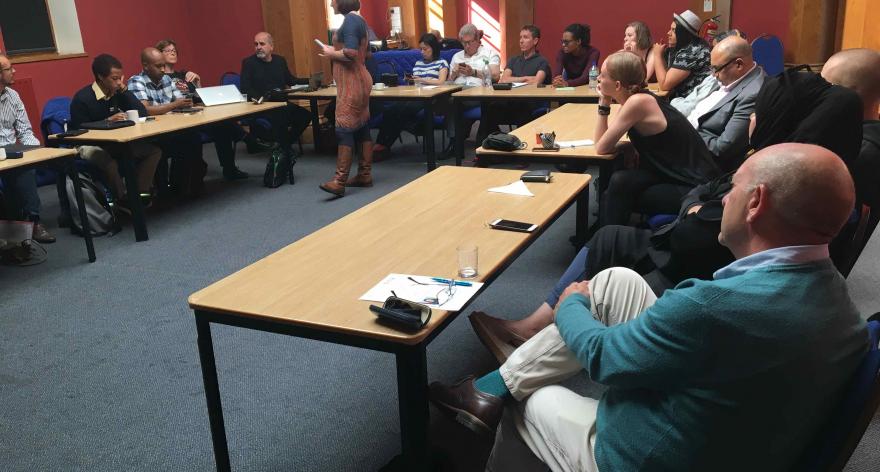 What is the Anna Lindh Foundation?
The ALF is an official body belonging to the 42 member states of the Union for the Mediterranean, tasked with promoting intercultural dialogue through civil society partnerships across the region, to bring people together, build trust and improve mutual understanding.

UK civil society has played a central role in the regional programme of the Anna Lindh Foundation, leading and collaborating in 18 new transnational projects since 2006, involving partners in the Middle East and North Africa region. The UK network includes international NGOs, leading academic institutions, media bodies, lobbying and campaigning groups, arts organisations and community/youth groups, and is co-ordinated by In Place Of War, a multi-award winning organisation based within the University of Manchester, who were elected as Head of Network by members in January 2015. In Place Of War supports artists and creative communities living in sites of war, revolution and conflict to build powerful networks, create social change through creativity and demonstrate the value of the arts to public space, public life and public debate.

Projects involving UK network members have taken place in the fields of literature, online media and blogging, artistic mobility and creativity. Our current activities are best presented by our ALF UK Facebook page.

Between 2005 and 2015 the UK network organised a number of meetings and capacity-building events with help from the ALF through the Network Co-ordination Support Scheme (NCSS). In recent years several international forums have also been co-organised in the UK by the ALF in collaboration with the network, including the following:

The EuroMed region is currently facing major challenges, with peace, prosperity and stability seemingly under threat in a great many places. Economic uncertainties and new realities have been compounded by war in some of the EuroMed's nearest neighbours, bringing people from diverse cultures together in situations which many find difficult. At this time, the ALF networks are a unique vehicle for developing greater mutual understanding and solidarity amongst the peoples of the EuroMed region through dialogue and co-operation. In the next few years IPOW hopes to enable ALF UK network members to become more actively involved in collective efforts, both in the UK and through stronger regional partnerships, resulting in a louder voice and greater impact locally and internationally.

In Place Of War (University of Manchester)