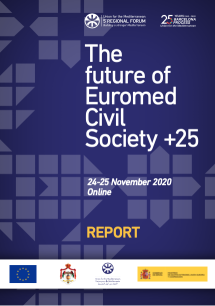 The Fifth UfM Regional Forum, held on 27 November 2020, was therefore a timely occasion for the UfM Member States to reaffirm their commitment to the principles of the Union for the Mediterranean and to reiterate their engagement in the Euro-Mediterranean dialogue within the UfM framework. On this symbolic year for Mediterranean cooperation, the member states decided to particularly celebrate people-to-people cooperation. Indeed, since the inception of the Barcelona Process, civil society has been playing a key role. Its contribution has been recognised by the signatories of the 1995 Barcelona Declaration as fundamental in the process of development of the Euro-Mediterranean Partnership and as an essential factor for greater understanding and closeness between the people.

On 29 November and 1 December 1995, Barcelona hosted the 1st Euromed Civil Forum, where over 1000 representatives of Mediterranean civil society brought their ideas to the new framework of debate and cooperation offered by the new Euro-Mediterranean Partnership. Since then, the Euromed Civil Forum has accompanied a number of EuroMed ministerial conferences. In light of this historical role, as well as the renewed impulse given by the UfM to the link between governments and civil society, the 5th UfM Regional Forum offered an ideal opportunity to hold a forum to discuss in an open and participatory way the role of civil society in Euro-Mediterranean relations, as well as its action in addressing emerging chal-lenges across the region, and the forms it will take in the years to come.