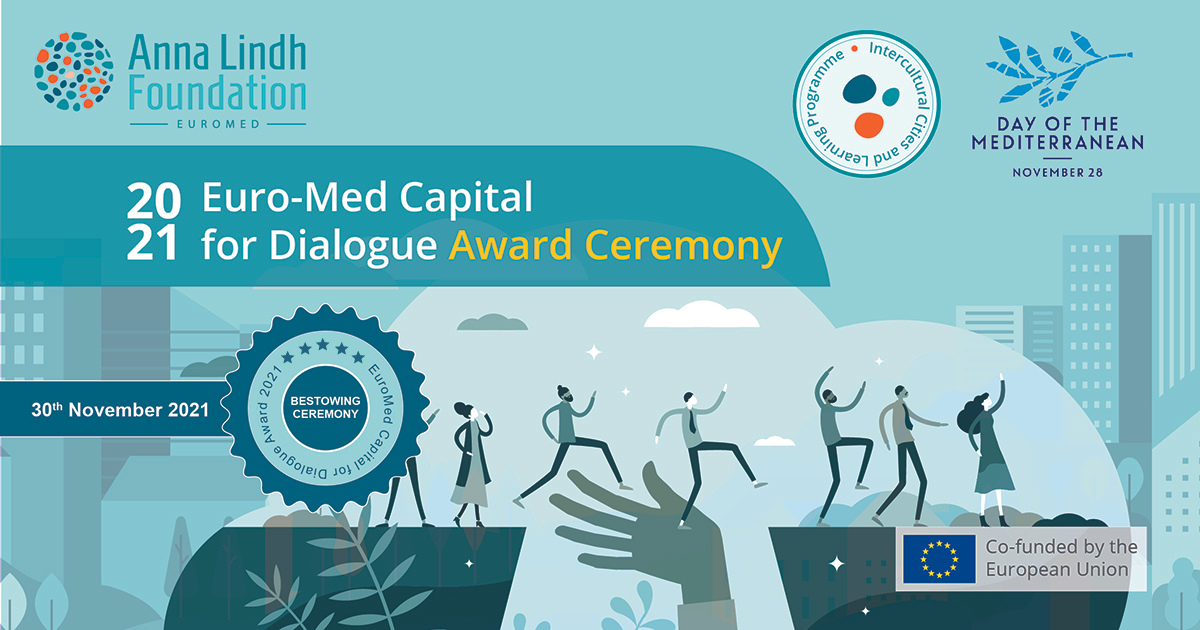 On 30 November 2021, in the framework of the Mediterranean Day, the Anna Lindh Foundation organised on the side of Union for the Mediterranean Regional Forum, the official bestowing Ceremony of the EuroMed Capital for Dialogue Award 2021.

The Ceremony was held online and was conceived as a regional gathering to showcase the work and strategic vision for the promotion of intercultural dialogue of two cities recognised as EuroMed Capital for Dialogue 2021 Limassol (Cyprus) and Mostar (Bosnia and Herzegovina), as well as stimulate a reflection on the importance to promote city-to-city cooperation and support civil society action for the advancement of intercultural dialogue at the local level.

“Today we'll have the opportunity to exchange reflections, listen to the experience of local authorities, CSOs & young people around the promotion of intercultural dialogue at the City level” highlighted Mr Josep Ferré, Executive Director of the Anna Lindh Foundation. He added: “ALF is proud to have worked for the conceptualisation of the EuroMed Capital for Dialogue Award together with experts and a significant number of partner institutions who have a long-standing experience in the promotion of city-to-city cooperation.”

Mayor of Limassol (Cyprus), Mr Nicos Nicolaides highlighted: "The notion and concept of an Intercultural City that ALF promotes is especially important in times of increased migration and instability in the Mediterranean region". He added: "By receiving the EuroMed Capital for Dialogue for the 2021, Limassol commits itself to continue to be a living example and an Ambassador-city of the Diversity and Dialogue between diverse cultures and peoples.”

Mayor of Mostar, Bosnia & Herzegovina, Mr Mario Kordić highlighted: “It is a great honour to be a part of this story and I am proud that my Mostar is the winner of this prestigious award". He added: "Mostar advocates dialogue as an axiom that must exist among all the inhabitants of this country & this city. This is exactly how we see the future but also the only model applicable to all multinational & multi-religious cities.”

Several reflections were shared during the roundtable discussion about Intercultural dialogue at the city level.

“Covid-19 offered us the opportunity to connect together, to talk about solution in our communities at the city level and new ways to counter violent extremism.” Said Mr Oussema Chaabouni, President of WeYouth Organization.

Ms Aliki Moschis-Gauguet, Member of the ALF Advisory Council and President & Founder of FAM Network said that it is important to invest in the youth. This generation of Erasmus and Anna Lindh have the will and the skills to better learn from the mistakes of the past.

Directorate-General for Neighbourhood and Enlargement Negotiations, Regional Programmes Neighbourhood South - European Commission, Mr Jean-Marie Moreau concluded by highlighting “The challenges caused by Covid-19 can be transformed into opportunities to strengthen social cohesion and dialogue between communities; they can also introduce a new form of communication.”

Head of Operations and Intercultural Research – Anna Lindh Foundation, Ms Eleonora Insalaco, concluded the Ceremony by stating "This Award Ceremony is not a point of arrival but rather of departure to continue supporting the dialogue action led by our civil society network and municipalities all around the region.”