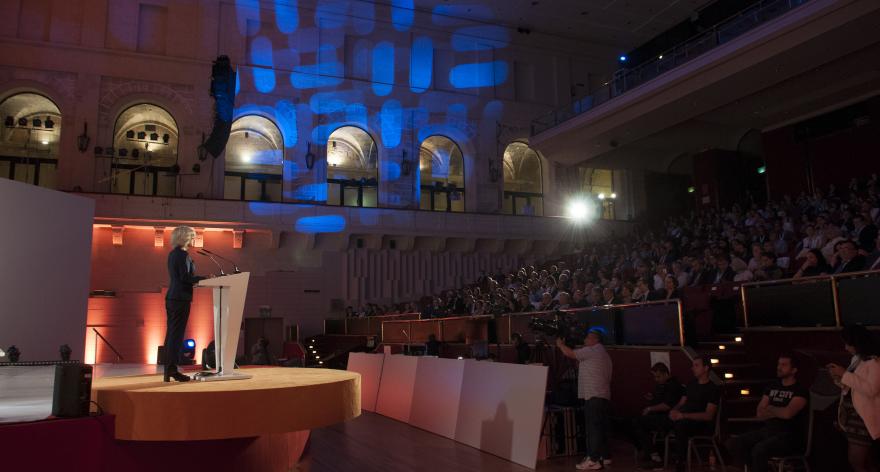 We were founded in 2004 and our Alexandria Headquarters inaugurated in 2005, making us the first common institution for dialogue co-created by the European Union and its Mediterranean Partner countries.

Why the Foundation was created?

The early years of the 21st century were marked a series of global events that risked fueling polarization between societies in the Mediterranean region, from September 11 and the ‘War on Terror’ to the invasion of Iraq and Madrid bombings.

We were created on the political initiative of the President of the European Commission Romano Prodi, “to take action to restart dialogue and defuse the risk of a clash of civilizations”.

A High Level Advisory Group was formed by Prodi to explore the roots of polairsation between societies, taking into account the impact of conflicts in the Mediterranean and the broader context of economic globalization, immigration and “identity”. In its Report, that continues to serve as operational blueprint for the Foundation, the High-Level Group stress education, skills and media to renew cultural dialogue, and foresee the centrality of civil society and investment in youth.

Originally called the “Euro-Mediterranean Foundation for Dialogue between Cultures”, the Foundation was given the name of the late Swedish Foreign Minister Anna Lindh, who was assassinated in 2003 in an act of hate crime; Anna’s lifetime commitment to equal partnership between the North and South, and to multilateral partnership action, became a guiding principle for our work.

The Barcelona Declaration establishes the Euro-Mediterranean Partnership, the far-reaching political partnership between the EU and its Mediterranean partner countries.

High-Level Group on Intercultural Dialogue, on the initiative of the European Commission President, recommends the creation of a Euro-Mediterranean Foundation.

Ministers of Foreign Affairs of the Euro-Med Member States agree on creating the Anna Lindh Foundation and establish it's statutes.

Creation of the Foundation National Civil Society Networks. The Alexandria Headquarters inaugurated, with the first general assembly of the Network coordinators.

Landmark “1001 Actions for Dialogue” Campaign launched for the EU and Euro-Med Year of Intercultural Dialogue, with syncronised civil society-led intercultural initiatives in 30+ counties.

“Restore Trust, Rebuild Bridges” regional initiative in response to the Gaza War and the impact of the economic crisis on intercultural relations.

First MED FORUM takes place in Barcelona, and the flagship report “Intercultural Trends in the Euro-Mediterranean region” launched with Gallup.

The Foundation marks its 10th anniversary in Naples, and launches the second edition of its flagship Intercultural Trends Report.

42 Member States adopt new 10 Year Strategy, “Working Together Towards 2025”. The Foundation becomes member of the steering group for the first UN-mandated global report on Youth, Peace and Security.

Launch of “Young Mediterranean Voices” at MED FORUM in Valletta, under the patronage of EU High-Representative for Foreign Affairs Federica Mogherini. Five years in the making, first Education Handbook on “Intercultural Citizenship” published.

The Foundation dialogue methodologies show-cased on the regional and global stage, with the Africa-EU Summit in Abidjan and the United Nations General Assembly in New York.

The Foundation is member of the consortium tasked to implement the pilot phase of the first “Erasmus+ Virtual Exchange” as part of the new European Commission programming from 2020.