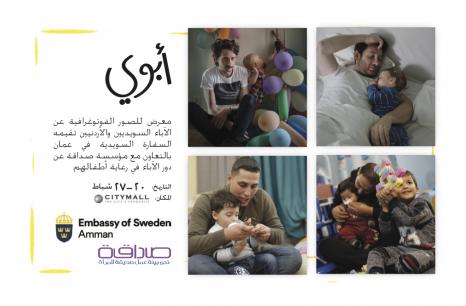 Jordanian and Swedish Dads is a photography exhibition and a joint project by the Swedish Embassy in Amman and the women's rights organization SADAQA. The project highlights the importance of engaged fatherhood in creating a stronger society and improving women's rights in Jordan. "This exhibition will hopefully put fathers in the forefront again, not as heroes, but as rightful owners to their paternity and as equals in sharing household work and responsibilities," concluded SADAQA in a statement sent to The Jordan Times.

The exhibition consists of 36 professional photographs of Jordanian and Swedish fathers, intimately caring for their children. Last spring, the exhibition was complemented by a Facebook competition, in which Jordanian fathers were encouraged to send pictures of themselves spending time with their children at home. One of the participants was Adnan Kandeel, a Jordanian Swede, who told the Jordan Times that:

"Good fatherhood promotes compassion, empathy, equality and the respect and appreciation of your partner. Acknowledging the role and value of the mother helps fight the prejudice and assumptions that limit the rights and equal opportunities for women in education, work and involvement in several aspects of political and economic roles. Simply put, in families where fathers are involved, women are empowered."