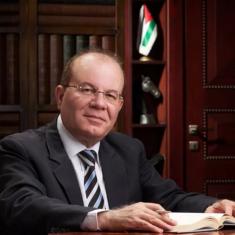 Tribute to our late Executive Director, Dr. Nabil Al-Sharif, who passed away on 6th of March 2021

Nabil Al-Sharif had an extensive background in public service, which includes positions as Minister of Media Affairs & Government Spokesperson of The Hashemite Kingdom of Jordan and member of the Upper House of Jordan’s Parliament.

Al-Sharif had also served Jordan’s Foreign Service in the capacity of Ambassador to Morocco, Mauritania and Senegal.

Previously, Al-Sharif has also worked as Editor-in-Chief of the Ad-Dustour newspaper, which is an Arabic-language daily in Jordan. He was also the cultural editor of a local Jordanian daily and wrote extensively both in Arabic and English on the need for enhancing intercultural dialogue.

Dr Al-Sharif obtained his PhD and MA in English Literature from Indiana University in the US. He also taught at three Jordanian universities for a number of years.