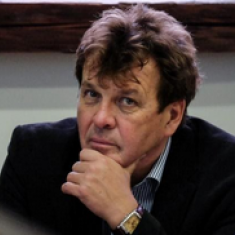 Ferenc Miszlivetz is the founder and director of the Institute of Advanced Studies Kőszeg (iASK), a Jean Monnet professor and full professor at the University of Pannonia. He is a scientific advisor at the Centre for Social Sciences, Institute for Political Science, at the Hungarian Academy of Sciences. He elaborated the project on creative cities and sustainable regions embedded in the KRAFT Centre at iASK.

His research interests include democracy, civil society, Central-European and European Studies, globalization and sustainability. He has taught and conducted research at various universities in Europe and the United States, including recently at the University of Bologna, and Columbia University in New York. Since 2012 he has served as the president of the Social Sciences unit of the Hungarian UNESCO Committee and holds a UNESCO Chair in Cultural Heritage and Sustainability in Kőszeg.

He has received numerous awards, including the Knight’s Cross of the Hungarian Republic (2005).